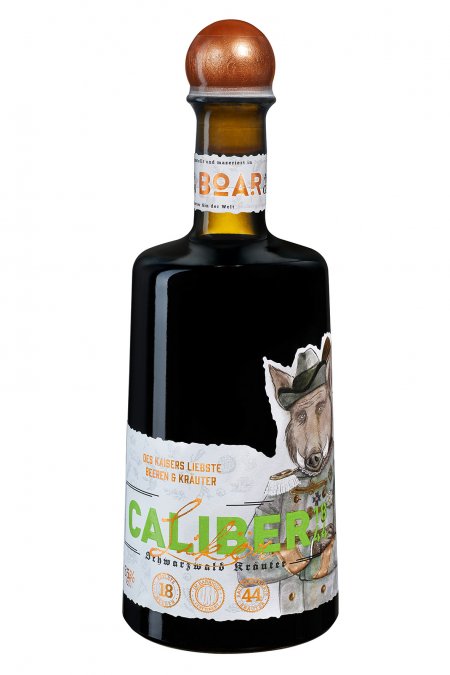 Caliber 1844 is a very popular herbal liqueur from the Black Forest.

Its special character comes from 18 aromatic berries and 44 fine herbs from the local area. Cold macerated and stored in oak barrels for three months, this Black Forest liqueur matures to a very special format – of genuine caliber. This herbal liqueur combines the beginnings of the distillery on our Black Forest farm in 1844 and the exciting stories of emperors and kings with the here and now. The fine berry, slightly acidic aromas of blackcurrant and cranberry, coupled with the fruity notes of wild raspberry and beguiling elderberry meet the intense herbal diversity of the Black Forest. Mineralized by the special Peterstal spring water from our own spring, refined and produced with BOAR Gin, the world's record award-winning gin, this Black Forest liqueur is more than just the pure DNA of the Black Forest. The art of distilling for centuries

Caliber 1844 stands for a centuries-old tradition of thousands of small distilleries in tucked away valleys and side valleys and also for the art of distilling at our Black Forest farm, which was already well known far beyond our valley.

More about our distillery As in the past, this Black Forest liqueur is made by hand in our small family distillery. To mark the occasion of our 175-year-old distilling tradition, the "Badische Caliber" has been recomposed with 18 aromatic berries and 44 local herbs to commemorate the year our family distillery was founded in 1844.

THE EMPEROR'S FAVORITE BERRIES AND HERBS

The portrait of the Black Forest boar, the BOAR distillery's distinguishing mark, in imperial robes recalls one of the biggest fans of the "Badische Caliber", Emperor Wilhelm I. Emperor Wilhelm I and Empress Augusta of Saxony-Weimar

The first German Emperor Wilhelm I, Empress Augusta of Saxony-Weimar, Crown Prince Friedrich and the imperial entourage visited the spa town of Bad Peterstal, famous for its medicinal springs throughout the Empire, on 30 September 1876. The imperial family celebrated the Empress Augusta's 65th birthday with a large feast in the Kurhaus. Emperor Wilhelm had been a passionate hunter since his youth and loved the stalking hunt, which could not take place on that September night in 1876 due to a thunderstorm. He and Andreas Kessler, the then head of the hunting ground and founder of the Black Forest distillery on our farm, were advocates of respectful and responsible hunting throughout their lives. As a welcome gift and in honor of Emperor Wilhelm's documented hunting successes, the mayor and pastor Joseph Matt presented him with a "Badische Caliber". This special honor was only given to the best shooters on the hunting grounds around Bad Peterstal after a successful hunt.

The "Badische Caliber" is not an extremely large cartridge though, but one of the first herbal liqueurs of that time. This liqueur got its name from the hunters in the Black Forest, when they toasted to the biggest kill with the shooter after the hunt (Baden: "Des isch ä wonsinnigs Caliber" – "What an incredible caliber").

Weeks after the Emperor's visit, the mayor, Joseph Matt, received a letter of thanks for this "particularly exquisite treat" together with the request to send more bottles of this "Badische Caliber" to the imperial summer residence at Babelsberg Palace in Potsdam, signed with the imperial seal.

The means of payment at that time was the portrait of our Guest of Honor, the first German Emperor Wilhelm I, in September 1876.